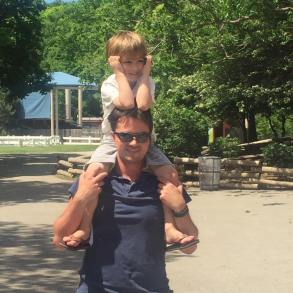 Today was “zoo day” for the Sylfest family. Well, I should clarify. Most days in our house are kind of zoo-like, but today we actually traveled to the zoo! From the moment we first said the “z-word” this morning both boys started to bounce off of the walls. So we raced around the house packing up all of the necessities. Sunscreen, sweatshirts, diapers, undies, spare undies, shorts, spare shorts, juice cups, snacks, more snacks, hats, sunglasses, stroller…you know just the necessities. We set a goal to leave the house by 9:15am and worked diligently to make that happen. We set just enough timers for Grayson so that he would pee in the potty the minute before we would load into the car. We tag-teamed getting the kids dressed and getting ourselves dressed. When all was said and done we loaded into the car and set off for the zoo at 9:21am. Not too shabby.

Any parent that sets out on an all-day adventure with a 4 year old and 2 year old expects that they will be returning home exhausted. And holy crap did we ever. Maybe it was the fact that we were out of practice just coming off of vacation. Maybe it was the fact that both kiddos insisted on walking all day; which meant a lot more chasing. Maybe it was all the time we spent talking up the zoo; planting so many ideas into their little heads about all of the amazing things they could do at the zoo. Maybe it was the fact that we are 32 and these days 32 just feels really really old. It was probably a little bit of all of these things. Oh, did I mention there were 4 adults and 2 kids? Cuz there were. The adults had the clear advantage, and yet as we walked out of the zoo gates 5 hours after starting our adventure all 4 adults were dragging their feet and the lunch-less (apparently there is not time to eat at the zoo; which is even more annoying because food is 3x as expensive), nap-less (cuz that would require sitting still and maybe even riding in the stroller we pushed around all day) toddlers were still running.

I have been a little slow out of the gate after getting back from our adult-only vacation. But something happened at the zoo today and it got me thinking about our life. About our family. About the things that run through my mind every time we venture out. We had an amazing day. By all accounts the kids were troopers. They walked their short little legs all over the zoo. They were polite (kind of) and waited their turns (sort of) and they listened (ish) when we asked them to stop or wait. They were overcome with a big grin of excitement every time we approached a new animal exhibit. They were truly joyful. And seeing them that way made our hearts so happy. But amongst all of these moments of happiness there are also moments of worry. We know that we cannot stay home and live our life inside of a bubble, so we venture out and we hope for the best. Sometimes Grayson hits for no reason. Sometimes loud noises scare him. Sometimes he lashes out on his brother when he is told “no”. And sometimes he finds himself in a situation that makes him nervous or scared and in that moment he does not have the language to communicate his need. All of these things happened today. But the last was (and always is) the toughest to watch as a parent.

The zoo has a fantastic play area. And in the “’big kids” part there are 2 series of jungle gyms. And to go to the very tip top you have to climb a small ladder through one narrow hole. It is only large enough for one kid at a time. And, once you get to the very top then the only way down is through one of 2 very tall winding covered slides. Now, Grayson does not do covered slides. I am not sure exactly why. But, he never has. He loves open slides. So upon making his way up to the very top of the 1st side of the jungle gyms you could see his body overcome with the realization that his only options to come back down were through one of the scary covered slides or the ladder. For a moment he forgot about the choice and just enjoyed being up so high. He could see that the other kids were having fun. He stood next to them and jumped up and down in excitement as they made their way into the slides. He was laughing and smiling. And from the bottom I tried to verbally coax him to try the slide. But my words made him feel more uneasy and he grew frustrated. Eventually he determined that the only way down was back through the ladder. Unfortunately, there was a never ending stream of kids coming up. Grayson would dip his foot down towards the ladder and would quickly pull it back up as another kid popped out of the hole. He was growing more and more frustrated. So, I walked as close as I could get and made eye contact with a bigger kid. I told the kid that my son was up top and he was afraid and he needed help to come back down the ladder. And that nice little kid told the other kids to stop climbing and they let Grayson slowly work his way back down. Now, because Grayson is 4, you will never guess what he did next? He ran immediately over to the other side of the playground and went all the way up the ladder to the tippy top…again. This side was even higher, so he could not even hear my voice from up high. I realized that the kids at the bottom of the ladder were much higher too. So I spent the next few minutes feeling anxious about how to help Grayson when he was ready to come down. He was oblivious; up there in the tippy top jumping up and down as kids zoomed down the slides. He was having a blast. And then he was done and ready to come down. This time he was a bit, shall we say “bolder” in his approach. He started jabbing his fit forcefully down into the hole to clear the ladder. There was a man at the base of the ladder waiting to help his son. I saw the anger wash over his face, “who the hell is this little brat and why is he kicking these kids.” Crap. I politely yelled “man in the white shirt” (I know, clever). After a few more times the man looked over at me and I said “I am very sorry, my son does not know how to communicate that he needs to come down. Will you please help him down?” I do not know if it was the mother’s plea or the look of concern on my face, but the man’s expression immediately softened. He helped Grayson down. And when Grayson got to the bottom he said “thank you man.” I ran over to Grayson and quickly pointed out a completely different part of the part of the playground. Two times was enough for the momma.

As I walked away from the park I was happy that it was over. And I knew that in the grand scheme of the day it was a very minor incident. But it went to the core of our struggles. Our struggle for Grayson to find his voice. To communicate. To be understood. The last thing I want is to walk around everywhere we go playing the “A-Card”. That life is not the life for us. But sometimes without using the card people write Grayson off as rude or disobedient. Sometimes understanding that he has autism helps people to turn off their judgment and turn on their helpful understanding. And sometimes the helpful understanding can make such a big difference in the way our day plays out. Days like today help remind me of why I am doing this. Why I am writing our story. To give a voice to parents like James and I who are struggling to walk the line between needing support and not wanting special treatment. At the end of the day what we really want is to live in a world that is more tolerant of people. Not people with autism; all people. Today I needed help and I made a connection with a young boy and a grown man. Both of which I had never met before. Both of which had no reason to help me. But they did. And so I remind you that we do not always know the “full story”. Sometimes we only see a small piece of something that is really much bigger. And so in that small piece, remember that you can choose to judge or help. And, if you do not know how to help, just know by not judging you are already being incredibly helpful!

One thought on “A Day at the Zoo”