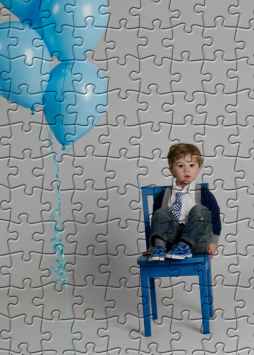 I remember the first time that someone used the word “autism” in reference to Grayson. I remember it so clearly because it felt like I took a bullet to the heart. It was months before our actual diagnosis. Months before we knew just how long and crazy and complicated and ever-changing our journey would be. It was said so casually. So easy. Like “hmm, may it is autism.” Or a common cold, or allergies or maybe he was just 2. It was said in one instant and then it was quiet. Everything was quiet. Except, the people in the room around me were still talking. I just could not hear their words. My head was swirling with a million thoughts. Thoughts about life, thoughts about the future. Thoughts about the life I imagined for Grayson. For me. And the longer my head swirled the longer I existed in the silence. Watching the mouths of the people around me move. Knowing that there words were important. Knowing that they were probably explaining away their use of the word. Worst case. Not even something that should be on our radar. Except, it was. In that moment autism was not only on my radar… it was the only thing I could think about. It felt impossible; and completely possible all at the same time. It felt like it did not fit at all; and like it fit perfectly, too perfectly. It felt like an out-of-body experience. Except it was me, in my body, hearing words that you never imagine hearing as a mother. In that moment the parenting gig took a hard turn towards reality. Life was about to be real in way that I had not prepared myself for.

It was a pretty normal day. I was working from home so that I could meet with Grayson’s team. Back then our team was pretty different than it is today. By age 2 we noticed that Grayson’s speech was pretty significantly behind the speech of his same-aged peers. We had heard everything from “he will grow out of it”, “everyone hits milestones differently”, “maybe he just is not a talker” (this one really made me laugh. I mean after all….he was my child. This was most certainly not the case.) And so I gave our pediatrician a heads up that I wanted to talk about some delays at Grayson next well-baby check. Just a month later at Grayson’s 2nd year appointment our pediatrician agreed that there may be more to the speech delay. She made a referral for us to our county’s Birth to 3 program. For those of you who are not familiar; Birth to 3 is a program provided by the county to help families gain access to early detection and in-turn to early intervention. The program requires a referral from a pediatrician and then a home visit for evaluation. And so we were referred and evaluated; the first of many evaluations that we would meet along our journey. And, it was determined that Grayson would receive weekly support for speech and behavioral development.

Each week the therapists came to the house and provided 45 minutes of service. Speech and behavior therapy with a two-year-old is actually pretty fascinating to watch. Because two-year-olds really do not do anything for any substantial amount of time. Back then life was moving from one 20 second activity to another. So the therapists would come in and follow him around 20 second stint at a time. They worked on speech. They introduced sign language. They tried little and big strategies to kick start Grayson’s speech. We recognized the effect of Grayson’s speech delay on his behaviors. We knew that if the speech did not come together soon that the behaviors would only continue to get worse. So, we invited these almost-strangers into our house to spend 45 minutes a week with our two-year-old. And, once a month we met as a team to discuss his progress. It was during one of these monthly meetings that it happened. The day the “a-word” was first dropped into our lives.

I was sitting on the floor interacting with Grayson (and holding my 4 month old baby). We were casually talking about our strategies. Casually talking about Grayson’s changes and progressions. Causally talking about all of the things that could be “primary”. See, when your two year old has a significant speech delay it is important to determine if the speech delay is primary or secondary. If it is primary then you hope that with time, and socialization, that speech will gradually get on track. If the speech delay is secondary to something else; then you will never truly understand the speech delay until you find the primary cause. This was a pretty typical topic of conversation during the meetings. We talked about his obsessive tendencies and said “maybe it is some early version of OCD”. We talked about his sensitivity to sound and touch and wondered if maybe it was some sensory issue. And then on this day, for the first time, our therapist very casually added “you know, I just cannot decide if I think it is autism or not.”

And so I was silent, for much longer than was socially acceptable. As my head filled with questions and thoughts and fears my eyes raced between our two therapists. And then from somewhere inside I found the words…”I’m sorry, did you say Autism?” She realized in that instant she was telling me something I did not know. I think when someone says the thing that other people have been thinking all along there is a shared understanding. Kind of an unspoken “ok good, so we finally said it out loud.” Except this time, that was not the case. This time, she was saying something that I was not prepared to hear. She said something that I had never even imagined being a part of what we were going through. And yet, she had said it.

She recovered quickly; although I cannot say that there was anything gracious about it. Because, how can you graciously tell parents that you think their child might be on the autism spectrum? She told me that the team often pondered about autism symptoms, but that they had a lot of reasons to believe that it was not autism. Grayson is incredibly affectionate; he always has been. He makes deep connections with people; even people who he has not known for a long time. He craves social interactions. He is silly and funny and sarcastic. For all of these reasons and more; they were very hesitant to use the word. And so, we casually ended the conversation.

I spent the next few weeks trying to learn as much as I could about autism. And the topic continued to come up with our team. James and I decided that for our own peace of mind it would be best to make an appointment for an evaluation at a diagnostic facility. And so the process began. We were going to know in no uncertain terms whether or not Grayson was on the autism spectrum. It does not get more real than that. And so we were referred to the Waisman Center in Madison. In order to be referred Grayson had to have 2 hearing evaluations as well as another check-up and referral from the pediatrician. He thought the hearing test was silly; he had no idea just how un-funny it was. There were no problems with his hearing; confirming that hearing was not the primary concern. Our road to the test was a little complicated. We spent 2 months on the wait list for the Waisman Center; the waiting list to get put on the waiting list. They were under-staffed due to turnover and there was no end in sight. As each day passed Grayson came closer to age 3. And, at age 3 he would no longer be eligible for services through birth to 3. And so as each day passed we felt more unsettled. In many moments of desperation I reached out to a lifelong friend who had been such an amazing comfort during our journey. It is amazing to have friends that hold you up and push you forward. It is even MORE amazing when these people have awesome connections. This particular friends was a very well-known and respected SLP (Speech and Language Pathologist). And, within hours we were scheduled for an appointment in 3 weeks in Iowa.

I called this post “part one” because as you can tell our diagnosis journey was not short. I think the events of the day that we spent at the diagnostic center are important. They are a huge part of our story. And so, I will finish the story in another post. The story to this point captures a few things that are so important to mention:

Today I will take Rowan for his 2nd year check-up. And, I cannot help but reflect on how different I feel today than I did just 2 years ago with Grayson. I went to Grayson’s appointment filled with fear and questions and worry. I went to Grayson’s appointment feeling like we were getting it all wrong. I went to that appointment knowing that there was something in front of me that I just couldn’t see. Something that my son was trying to tell me. Something that seems so clear to me now. Rowan is a very typical 2 year old. In our house, the word typical has a big meaning. You see, typical does not just mean that he is walking and talking and hitting all of those normal milestones. In our house typical means that he is not showing signs and symptoms of autism. Did you know that the chances of parents having a subsequent child with autism are as high as 18%? You see, I was pregnant with Rowan by the time we began to see Grayson’s struggles. And Rowan was nearly 1 year old at the time we received Grayson’s official diagnosis. Can you imagine as a parent just how much that 18% scared the crap out of me? And so, when I say that Rowan is typical I mean a lot of things. I mean that he is walking and running and jumping and climbing. I mean that he is talking up a storm. He is talking and signing and telling stories and always telling us “thanks much.” I mean that he is tuned into the emotions of other people. He understands happy and sad and angry. He understands how to make someone feel better when they are crying. He says I love you. He throws epic tantrums. He changes his mind on a dime, because he can. He is 2. He is 2 in every sense of the word. And he is typical; in every sense of the word.